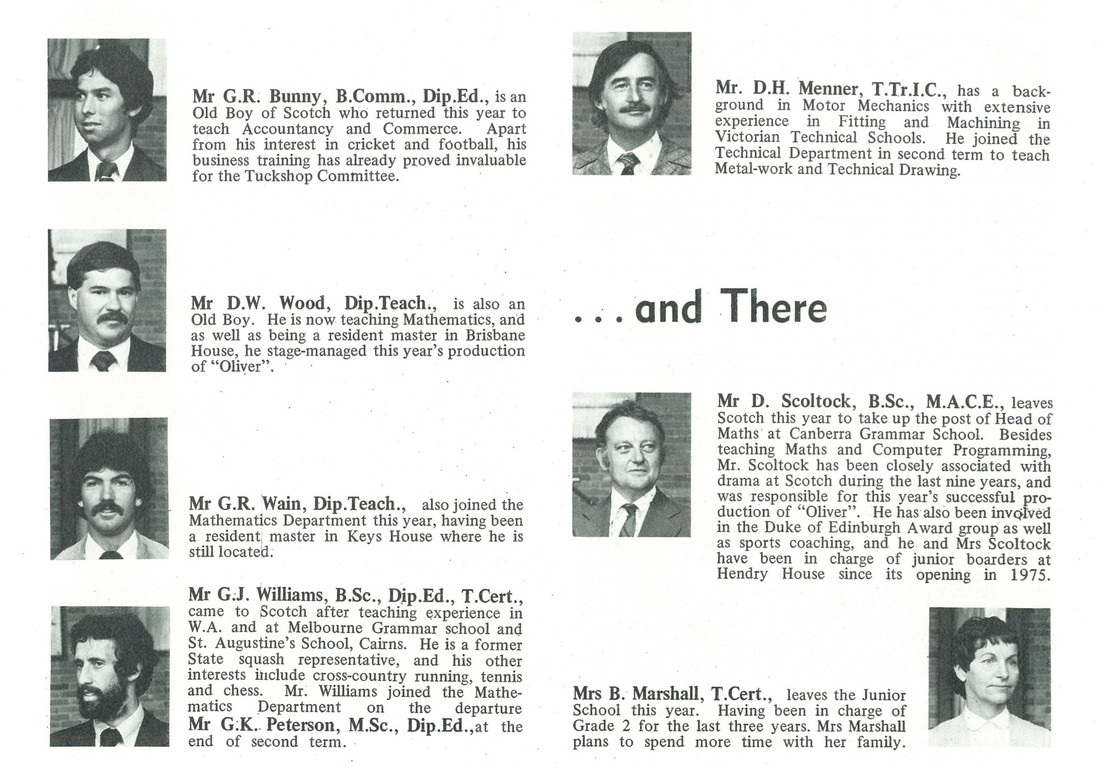 A photograph featuring 1979 Scotch College Staff, featured in the 179 Reporter volume 72 edition published in November of that year, page 10.

The Reporter features the following staff:

Mr G.R. Bunny, B.Comm., Dip.Ed., is an Old Boy of Scotch who returned this year to teach Accountancy and Commerce. Apart from his interest in cricket and football, hIS business training has already proved invaluable for the Tuckshop Committee.

Mr D. W. Wood, Dip Teach, is an Old Boy. He is now teachlng Mathematics, and as well as being a resIdent master In Brisbane House, he stage-managed this year's production of "Oliver".

Mr G. R. W. ain, Dip. Teach., The mathematics Department this year, having been a resident, master in Keys House where he is still located.

Mr. D. H. Menner, T. Tr.I.C., has a back- ground in Motor Mechanics with extensive experience in Fitting and Machining in Victorian Technical Schools. He joined the Technical Department in second term to teach Metal-work and Technical Drawing.

Mr D. ScoItock, B.Sc., M.A.C.E., leaves Scotch this year to take up the post of Head of Maths at Canberra Grammar School. Besides teaching Maths and Computer Programming, Mr. Scoltock has been closely associated with drama at Scotch during the last nine years, and was responsible for this year's successful production of "Oliver". He has also been Involved in the Duke of Edinburgh Award group as well as sports coaching, and he and Mrs Scoltock have been in charge of junior boarders at Hendry House since its opening in 1975.

Mrs B. Marshall, T.Cert., leaves the Junior School this year. Having been in charge of Grade 2 for the last three years. Mrs Marshall plans to spend more time with her family.