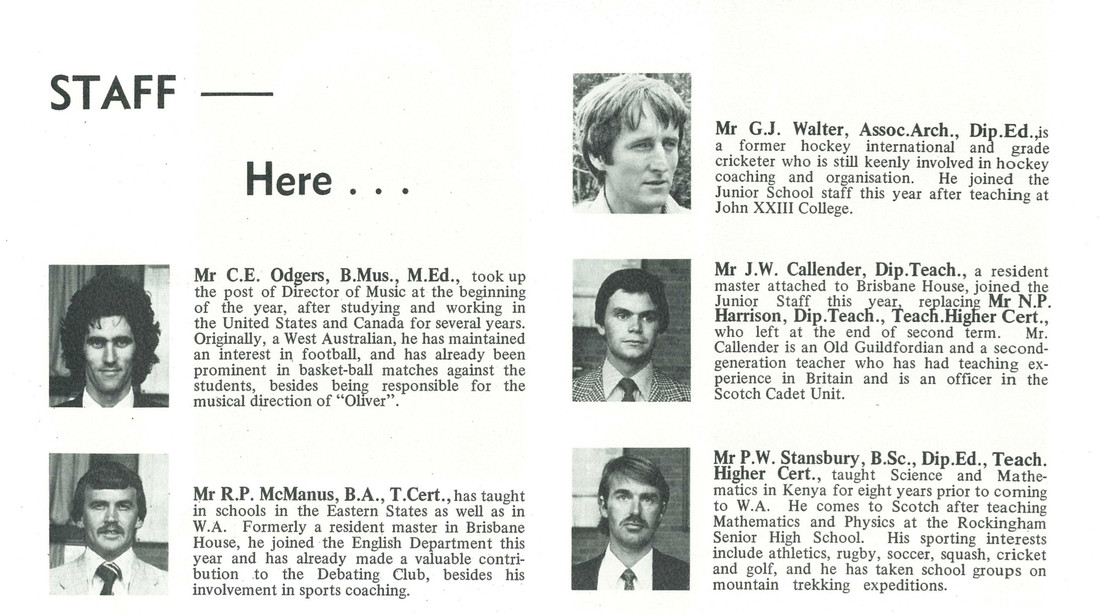 A photograph featuring the 1979 Staff, featured in the 1979 Reporter volume 72 edition published in November of that year, page 10.

"Staff Here" states:
Mr C.E. Odgers, B.Mus., M.Ed., took up the post of Director of Music at the beginning of the year, after studying and working in the United States and Canada for several years. Originally, a West Australian, he has maintained an interest in football, and has already been prominent in basket-ball matches against the students, besides being responsible for the musical direction of "Oliver".

Mr R.P. McManus, B.A., T.Cert., has taught in schools in the Eastern States as well as in W.A. Formerly a resident master in Brisbane House, he joined the English Department th~s year and has already '!lade a valuable contribution to the Debating Club, besIdes hIS involvement in sports coaching.

Mr G.J. WaIter, Assoc.Arch., Dip.Ed.Js a former hockey international and grade cricketer who is still keenly involved in hockey coaching and organisation. He joined the Junior School staff this year after teaching at John XXIII College.

Mr J.W. Callender, Dip.Teach., a resident master attached to Brisbane House, joined the Junior Staff this year". replacin,g Mr N.P. Harrison, Dip.Teacli., 1 each.Higner Cert., who left at the end of second term. Mr. Calendar is an Old Guildfordian and a second- generation teacher who has had teaching experience in Britain and is an officer in the Scotch Cadet Unit.

Mr P.W. Stansbury, B.Sc., Dip.Ed., Teach. Higher Cert., taught Science and Mathe- matics in Kenya for eight years prior to coming to W.A. He comes to Scotch after teaching Mathematics and Physics at the Rockingham Senior High School. His sporting interests include athletics, rugby, soccer, squash, cricket and golf, and he has taken school groups on mountain trekking expeditions.