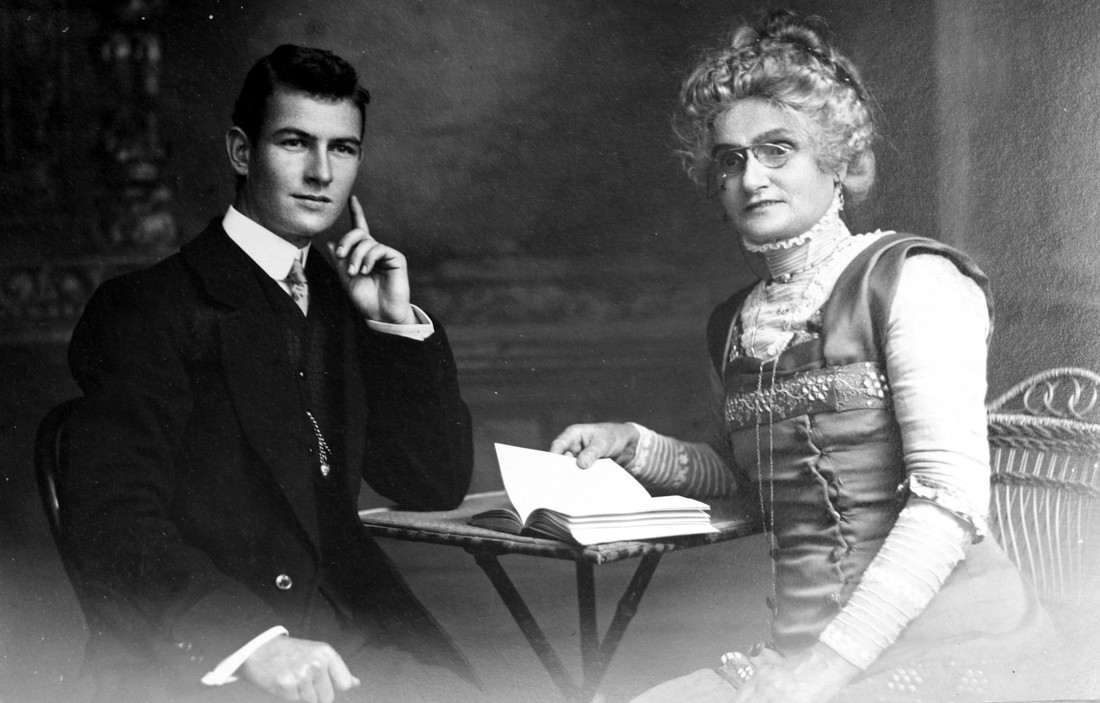 A circa 1913 studio photograph of William 'Bill' Hobson OSC1907 and his mother Lillian Hobson. The image was most probably taken when William was twenty one years of age. It was common for families to get studio photographs at the time.

The photographs portray the following themes - a youthful adult working on the land at Arthur River, enlisting for service in World War One, travelling through Egypt including the Suez Canal and Cairo on his way to the Western Front, Hospitalisation in England, living in London and returning home via Cape Town South Africa.

Bill Hobson enlisted in WWI First AIF on 18 September 1915, his date of joining is given as 27 September 1915. He was aged 23 years and 9 months and gave his occupation as clerk. His service number was 3025.

After training at Blackboy Bill he embarked for service overseas as part of the 28th Battalion reinforcements. Prior to embarkation he became engaged to Vickie Hamel. He sailed on the HMAS Medic on 18 January 1916. By then he was a Corporal.

On arrival in Egypt he was transferred to the newly created 53rd Battalion, 14th Brigade, 5th Division, which was made up of Gallipoli veterans from the 1st Battalion and the new reinforcements.

His time in action on the Western Front was short but distinguished. In 1916 he served with the 53rd Battalion, 14th Brigade, 5th Division, in the first major action by the AIF on the Western Front at the ‘Battle of Fromelles’. During this campaign the Division of around 7,000 servicemen suffered 5,533 casualties, with almost 2000 deaths. The assault has gone down as the worst day in Australian military history. Bill survived the battle but was wounded and evacuated to England. He was a stretcher bearer and awarded the Distinguished Conduct Medal (DCM) for his bravery, in bringing wounded in under very heavy fire for twenty seven hours while suffering a large shrapnel wound himself.

On return to Australia in 1919, Bill documented his time at Albany’s tented Quarantine station during the Spanish Flu Pandemic. The images further document his wedding to Vickie Hamel at St George’s Cathedral Perth and honeymoon at Caves House, Yallingup.