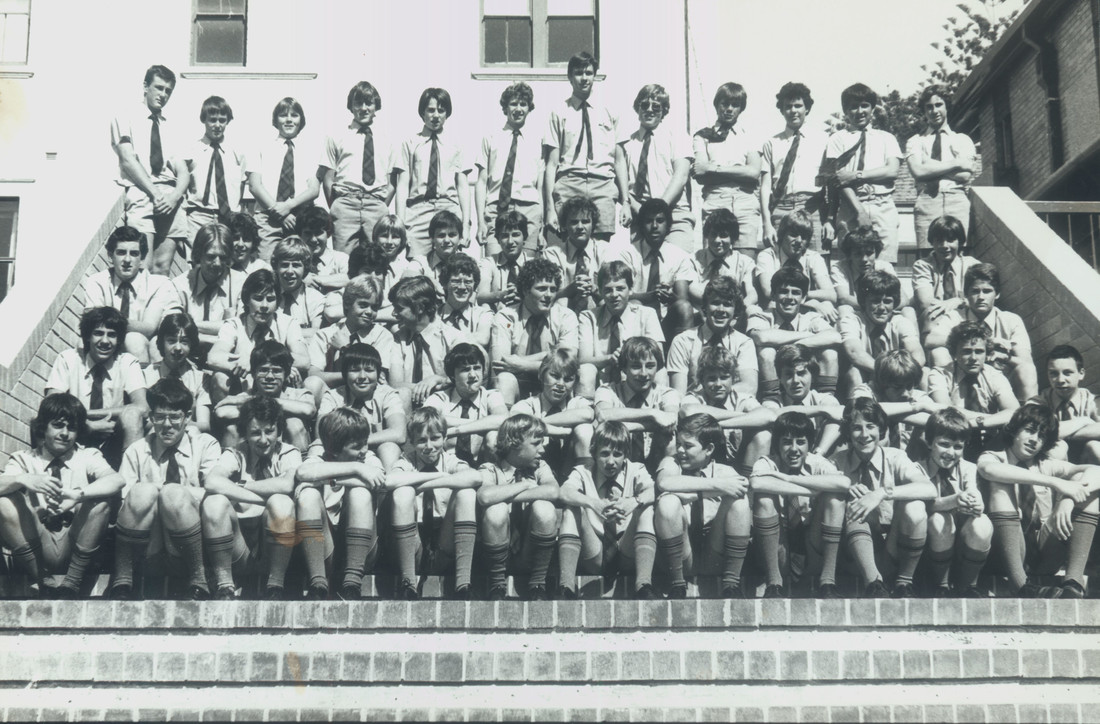 A photograph of Ross House sitting in the Top Oval steps leading to Senior School campus in 1981. The students are pictured in summer uniform.

The 1981 Reporter states:
"One of the fundamental aims of a House system
such as that operating at Scotch is to give a large
number of boys access to a wide range of activities -
artistic, sporting , and academic - with which they
may not otherwise come in contact.

Because of the number of activities, and the
relatively small number of boys in each House many themselves may not have automatically chosen, and indeed to which they may not have felt themselves suited. Thus situations often arose such as that which saw the Ross House Senior XV III made up of hockey players, rugby players, cross-country runners, besides a liberal sprinkling of football players.

Drama is one area which involves a great deal of
time and effort on the part of all the actors and
producers. Ross's play this year, "The Crazy World of
Advertising" - a difficult parody on cigarette
advertising - was creditably performed by a large cast, and narrowly missed a place in the best three.

Ross fielded teams in the many House sporting
competitions, and the results shown were very much
"a mixed bag". This was due mainly to the fact that
while all teams played with undeniable enthusiasm,
some teams were often at a loss in terms of basic
skills. Thanks here must go to the various team
captains throughout the year upon whose shoulders
much of the weight of organisation fell, and indeed
to all the boys who were members of the teams.

Debating, again, was an area in which Ross House
was able to dominate, this year seeing our Junior
team win the competition for the second year in
succession, although the Senior team, which began
with high aspirations, was defeated in the first round.

The effort shown in the "big events" - the
swimming and athletics - by Ross this year was
particularly pleasing. The House took part in the swimming, and achieved an excellent third place in the athletics, despite injuries to some of our key
athletes. Finishing the year on such a high note
was a fitting tribute to the spirit and energy of the
boys of Ross House, and although there are still some who as yet have not seen the value of participating for and with their House, it was a creditable year for all those concerned.

Thanks must go to Mark Smith and Stephen
Abernethy, both of whom helped tremendously in
the running of the House, and to Messrs McManus,
Maunder, Cornish, Latham and particularly to our
Housemaster, Mr Shortland-Jones, for the support
and guidance they gave us all throughout the year.

Finally, on behalf of all the Year 12's who are
leaving Ross House, I would like to wish the House
and its members well in all their future endeavours".