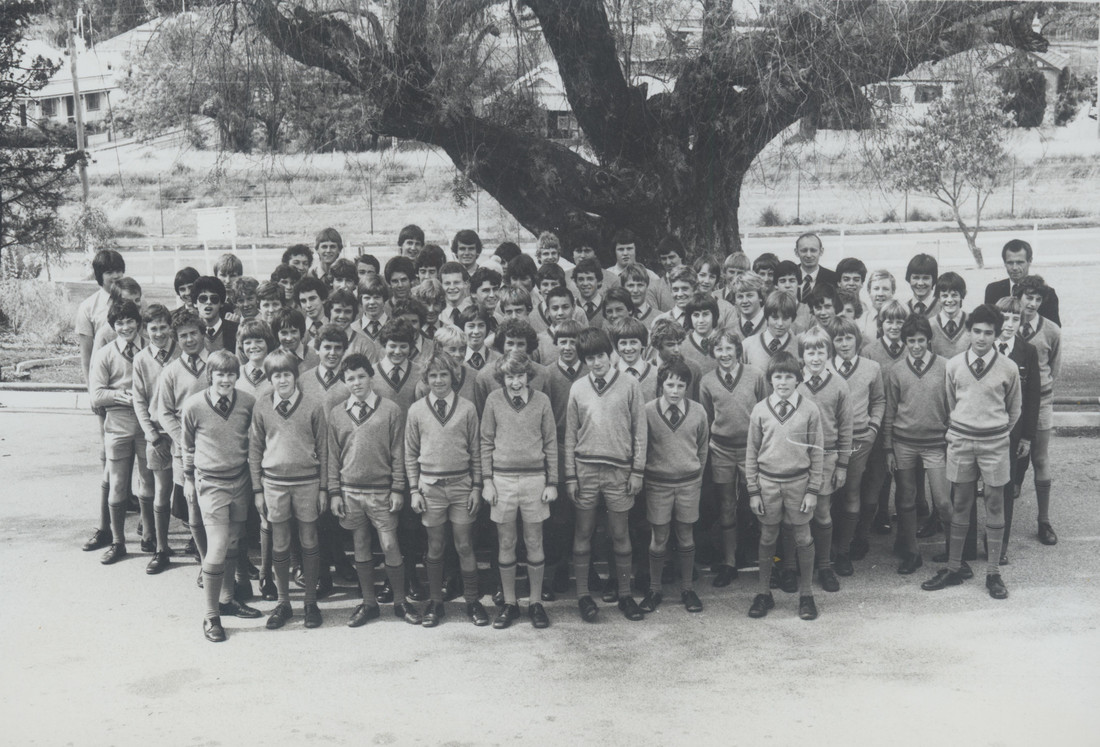 A photograph of the 1981 Stuart House taken near Claremont Crescent railway line.

House Captains Adam Gubbay OSC1981 and Bruce Goodwin OSC1981 wrote about the sentiment of Stuart House for that year in the Reporter:

"Once again the members of Stuart House have worked towards the consolidation of a good record. Various activities in all facets of school life have met with success.

As encouraged by the Headmaster, the positive attributes of the House system have again been displayed. Boys of all ages in the house have participated both as individuals and as members of a team with great zest.

Thus, the Stuart House component has in turn added to the enrichment of Scotch as a whole.

Most importantly, Stuart House spirit was evident throughout the year. Both participation and enthusiasm by its members were encouraging.

In past years stars have dominated the ranks of Stuart House. This year it has been an all-round effort by the boys. Although results achieved throughout the year were not as impressive in previous years, Stuart still managed to maintain good standards in both sporting and academic pursuits.

Some of the more notable successes were: the swimming, in which we came a close second, ably led by Marshall Flower; third in the cross-country;
and the fine performance of the junior debating team in narrowly losing the final. As usual, the triumphant senior tennis team finished a clear first.

Yet again Stuart must say farewell to the men of tomorrow - the Year 12's - and at the same time thank Mr Lindsay, Mr Greenhalgh, Mr Hammerstrand and Mr McClelland, who have fulfilled their part in
strengthening student-master bonds.

In addition, Mr McLay deserves a special "thank you". He has been the guiding force of the Stuart house unit for over 20 years now, and the familiar sight of his characteristic hat will no doubt serve to support Stuart in the years to come.

Good luck, Stuart, for next year!