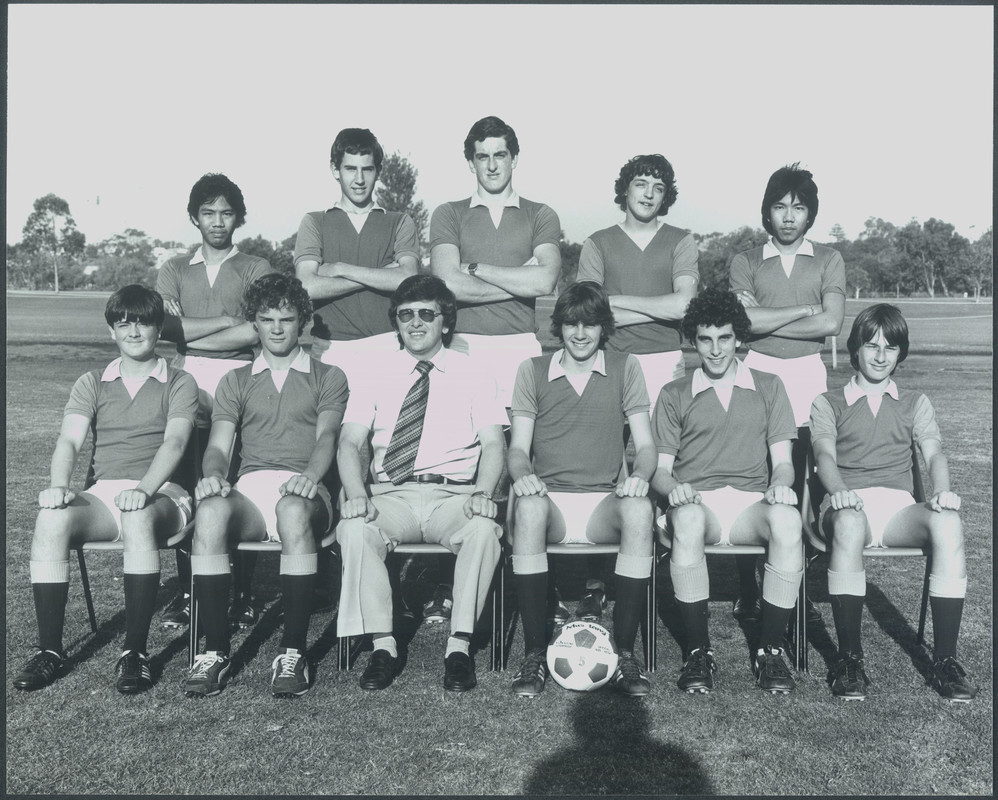 A photograph of the 1981 Public Schools Association (P.S.A.) Soccer Team. The team consisted on year 12 students seated outside on the Playing Fields oval near Memorial Grounds and Lake Claremont. Sadly Master C.L.M. de Jonghe passed away a few years after this photograph was taken.

B. W. Goodwin OSC1981 player in the team, authored the Soccer column for the 1981 Reporter stating:

"The success of any team centres upon two areas:
firstly, the ability of the individuals comprising the
team; and secondly, the quality of the team as a
co-ordinated unit.

The Scotch soccer team this year was really a
blend of these two. On the one hand we had the
determination and pushing-power of players like
Guilluame Davies couples with the consistency of
performance of Mark Golinger, Tibor Gulyas and
Cameron Hay - to name a few out of a team of
fine performers. On the other hand, the team
altogether, after a great start, a mid-season slump,
and a much brighter improvement as the season
drew to a close, really played quite well as a
functioning group of potentially very good players.

The opposition varied from very weak to
exceptionally strong, but it was the games
somewhere in between which showed that the
team had a fair bit of character and fighting spirit.
At times the First XI played some amazingly
imaginative, creative and intelligent soccer that
was attractive to watch, and it was a pity these flashes of brillance didn't come more often!

On the whole, soccer seems to be gaining in
popularity at Scotch especially in Years 8, 9, and
10. This is shown by the high level of skills required
for inclusion in the Under-15 team. Overall, soccer
is definitely catching on and it's a credit to the work
of Mr de Jonghe and Mr Saxton who, apart from
encouraging, helping and of course coaching, have
been a part of the fiercely contested Prefects v
Staff soccer matches played at lunchtime, that have
helped a lot in promoting soccer in the School.

Lately I feel that all team members should be
congratulated for a fine season and I hope that the
wave of exhilaration that rushes through the body
when the ball nestles in the back of the net, and the
solid sound of a well-struck pass, are never missing
from game to game!" 1981 Reporter page 63.